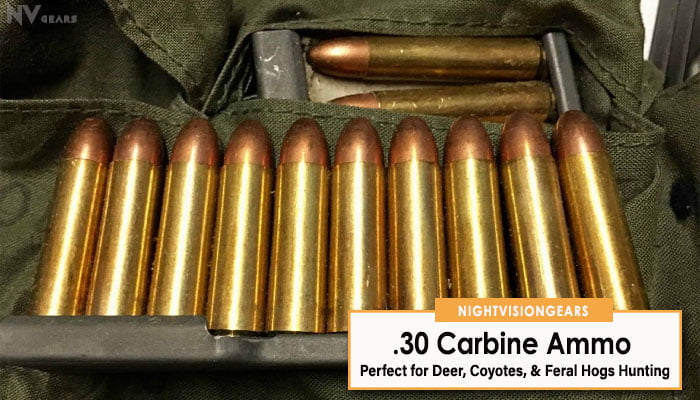 The .30 carbine ammo is one of the powerful cartridges that can be broadly used in many hunting applications. It was designed to perform less than a rifle and more than a pistol.

It was used by the US military in the time of the Second World War, so it was very famous among the civilian shooters and hunters.

This ammo is low-powered for some modern rifles, but still, it has the capacity to work in many conditions.

It is an intermediate cartridge that has a high impact on the cartridge field in the US military industry.

Do you want to know more about this .30 Carbine? Let’s jump into this review. Here, we will provide a complete review of the .30 Carbine ammo with its capabilities and functionalities.

The .30 Carbine is a rimless cartridge that was specially designed to use for M1 Carbine in the year of 1940 by the Winchester. It was used by the United States military during the beginning of the Second World War to use with the M1 Carbine.

Many soldiers, radio operators, truck drivers, motor crewmen, and forward observers use this .30 carbine ammo since it is difficult for them to carry the heavy and large M1 Garand rifle.

The M1 Carbine was mainly designed to provide them a lightweight and easy to carry weapon to perform powerful and effective long-range performance than a pistol or submachine gun.

The combination of semi-automatic M1 Carbine and 15-round detachable magazine provides a good amount of firepower to the soldier while compared to the other military firearms.

The Winchester designed the .30 carbine ammo along with the M1 carbine by remodeling the old .32 Winchester self-loading cartridge.

However, the .30 carbine ammo was not approved by the military industry since the soldiers who fought with powerful weapons did not use this cartridge.

The M1 carbine was 8-inches long and weighed 4 pounds, so it is the lightest weapon when compared with the M1 Garand.

Though the M1 carbine is lighter, it is more powerful and provides effective long-range shots than the M1911 pistol, so it is an excellent choice for the paratroopers, support troops, vehicle crewmen, etc.

The M1 carbine earned a reputation among the soldiers due to its better convenience.

At the end of the Second World War, the M1 carbine was remodeled to perform fire operations, and it became a very popular firearm during the Korean War.

The M2 carbine was the only weapon that could be used in the United States Military with the capacity of performing assault rifles such as German StG44 and Soviet AK-47.

The M3 carbine is one of the versions of the M1 carbine that was mounted with the primitive infrared scope and infrared light.

This was the first weapon that many American Soldiers used with night vision capacity. Nowadays, the .30 carbine ammo is still very popular in the United States.

There are more than M1 carbines manufactured, and they are very famous firearms loaded with .30 carbines. After the Second World War had ended, the Army sold thousands of new brands of M1 carbines to civilians to use for their needs.

The M1 carbine was widely famous among many shooters and hunters in the United States.

There are several cartridges such as Remington, Hornady, Winchester, Federal, Armscor, Tula, Sellier & Bellot provide various loads for the .30 carbine.

There are many companies that produce hollow points, soft points, and ballistic tipped bullets that are specially designed for hunting and self-defense applications.

The .30 carbine is one of the anemic ammo when compared to the other cartridges. You know that it was originally designed as an intermediate cartridge.

However, it can be used in many rifle rounds since it is the most powerful cartridge than other rounds of pistol that are cartridges used for deer hunting such as 10mm Auto, .357 Magnum, and .45 Colt.

The .30 carbine can be used for small to medium sized hunting games in suitable conditions since it provides accurate shots.

Many hunters prefer this .30 carbine for hunting various animals such as hogs, coyotes, whitetail deer, javelina, and foxes after the end of the Second World War. It is important to consider many things while using the .30 carbine.

First, you have to make sure that using the .30 carbine is legal in the place where you will hunt since there are some areas that restrict the use of .30 carbine.

You can legally use the .30 carbine for hunting deer in several states of the United States, such as Texas, Georgia, and Washington. Moreover, you should also make sure if there is any magazine restriction in the state that you are hunting with the M1 carbine.

Then, you can buy the 5 round magazine instead of using the 15 round magazines with M1 carbines. The other important thing is that you should n’t use FMJ ammo during big game hunting.

It is not only illegal to use for hunting, but also the FMJ ammo won’t perform near the hollow point or soft point ammo.

The FMJ has the capacity to penetrate deeply into the animal, but you may get tired of identifying the animal from a long distance.

Nowadays, there are many different types of expanding ammunition available on the market that make it an ideal choice for hunters who are interested in using .30 carbine.

You have to make sure that you take short-range shots with the .30 carbine. With this cartridge, the 100 yards is the perfect range for you, while the 50 yards is not bad.

It is very important when hunting with a pistol loaded with .30 carbine since the velocity of the cartridge is slower than when loaded with the normal rifle.

The range of .30 carbine is a medium-sized hunting game, so you have to perform within the range of the cartridge and don’t push it to get more range.

The final important thing is you don’t try to hunt the animals that are big in size since the .30 carbine is ideal for small to medium-sized hunting games such as deer, coyotes, and feral hogs.

The M1 carbine can be used for various purposes in many police departments and used by several civilian shooters in the United States.

The M1 carbine was only the common option before arriving at the Mini 14 and AR-15 for civilians who wanted a more powerful firearm than the pistol carrying a rifle.

The M1 carbine becomes very popular quickly for law enforcement use and home defenses since it is very lightweight, short, easy to handle, and contains 15 or 30 round magazines.

Jim Cirillo, he is a Stakeout Squad of the New York Police Department, honored the .30 carbine cartridge as one of the most powerful man stopping cartridges available on the market.

Cirillo mentioned this M1 carbine as his favorite weapon in his legendary book called Tales of the Stakeout Squad.

Though the .30 carbine is not an ideal choice for concealed carry, it will be an excellent choice for home defense where concealment is not a big issue.

The .30 carbine earned a high reputation among the many soldiers for the poor performance of the North Korean and Chinese soldiers during heavy cold temperatures.

Both the soft point .30 carbine and FMJ ammunition will penetrate easily through the various bulletproof vests that have the rated of Level IIIA in the short-range distance.

Thus, the .30 carbine penetrates into the thick winter clothes that the North Koreans and Chinese soldiers wore during the War.

The damage caused by these bullets was less than the shots the M1 Garand and BAR fired with the .30-06 rounds. The thick winter clothes help to soak the blood that flows from the bullet injury and also reduce the blood loss.

The poor performance of the .30 carbine FMJ rounds caused the Communist Soldiers to cause no injuries to our Marines and Soldiers by carbine in the battle.

Moreover, as we mentioned earlier, most of the soft point .30 carbine ammo available on the market will spread easily into the common bulletproof vests. Thus, you can rely on the expandable bullets to spread deeply into the vital parts of the attacker in any condition.

There are some handgun cartridges available in the industry to perform this operation. However, the over-penetration is the only thing that you have to be concerned about while using the .30 carbine.

Hence, you have to make sure that any object is behind your target since it has the capacity to penetrate through one or two walls with the more energy that may cause or attack unexpectedly.

Though it is an intermediate cartridge, the .30 carbine ammo is one of the cartridges used for many modern rifles and has been used widely for various applications. It has a standard reputation among the hunters and shooters of the United States.

This .30 carbine ammo contains certain limitations, but still, it is ideal for self-defense and hunting operations in several conditions.

Which is the Best .30 Carbine Ammo?

There are several manufacturers that produce .30 Carbine with high-quality to provide better performance on the field. In this section, we will see which is the best .30 carbine ammo available on the market.

If you’re looking for the perfect ammo for a .30 carbine weapon, then you can look at this Buffalo Bore Full Power soft point round nose.

It is the perfect choice for you to make excellent shots towards your target on the battlefield. This bullet provides you the energy of .44 magnum with the M1 carbine firearm.

With this load, there are no flaws while using the magazines, and it provides incredible performance for home defense. When it comes to accuracy, it won’t compromise its quality in any condition and provides accurate shots.

The penetration of this load is 14 inches, and the velocity of this will reduce at 50 yards, and the expansion will decline, which may affect the penetration.

The Hornady FTX Critical Defense line of ammo is specially designed for self-defense, and it has a standard reputation in the industry.

It comes with good velocity and accuracy, so it provides better penetration for tactical operations. The penetration of this bullet is 20 inches with controlled expansion.

Thus, you can prefer these Hornady Critical Defense loads for hunting small-sized feral hogs and deer.

There are lots of FMJ loads available on the market with high-quality that can be used for .30 carbines with the same characteristics.

This bullet penetrates 12 inches into the water with better expansion. Thus, Prvi Partizan is cheap compared to the other loads.

If you’re searching for a best .30 carbine ammo for your weapon, then this Wolf Ammo Perfomance .30 Carbine 110 Grain is one of the better choices to consider. It is made with various heavy duty materials to ensure durability and reliable performance. 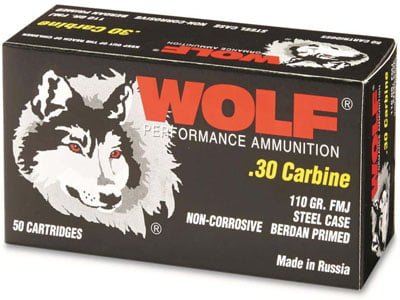 The Federal Premium Power-Shok 110 grain is one of the best .30 carbine ammo available on the market. It is designed to provide incredible performance with solid accuracy at an affordable price. It can be widely used for various applications such as medium and big hunting games. 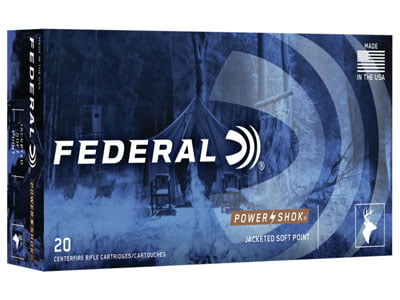 This Remington Core-Lokt .30 Carbine 110 Grain Core-Lokt Soft Point Centerfire Rifle Ammunition is believed by many hunters and shooters since 1939. The time-proven performance of this ammo makes it primary choice for hunting among the others. The tapered copper jacket of this catridge is locked to a solid lead core to deliver massive 2x expansion and retains weight. It is one of the best-selling ammunition for hunting available on the market. 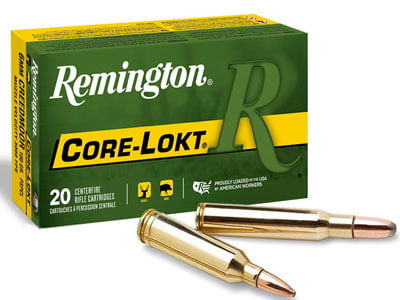