Two leading manufacturers Parrot and DJI of the drone industry had hit the market for the past two years. Both of their goals are to obtain aerial thermal photography at an affordable price.

Parrot Drone company has launched a new thermal version in April 2018, named Parrot Anafi Thermal Drone. This is an updated version of the Anafi folding Quadcopter with new innovative features.

This is one of the best portable thermal drones in the market today. It is mostly preferred for UAV operations by the inspection crews, search and rescue teams, and firefighters and for other purposes to give thermal images of the scene from above.

Both the drones are incorporated with a small thermal imaging camera from FLIR.

FLIR is the leading manufacturer in the world in producing thermal imaging camera for drones, moisture detection, termite detection, and even more.

The newly added FLIR’s Lepton 3.5 miniature thermal camera is located next to the visual camera and is responsible for thermal imagery.  As they are the same in both the drones, the thermal imaging is also similar, so let me explain the specifications of FLIR Thermal Camera.

FLIR Lepton camera is featured with a resolution of 160×120 pixels. It has the ability to detect the scene at a temperature range of about -10 degrees celsius to 400 degrees celsius. The thermal sensor is set with a 4K RGB camera that provides three-axis stabilized images for your mission.

The sensors enable the drone to operate on autopilot. You just need to set the flight parameters like the altitude, geofences and the custom Flight Plan routes.

Both the drones come with the same FLIR thermal camera and differ with the standard camera.

Anafi Thermal is equipped with a Sony® CMOS HDR sensor which makes it stand upper. It is also featured with lossless zoom mode that can capture the scene with minute details. This is the best option for the search and rescue teams to find people who are lost.

DJI is featured with a 48MP visual camera with a 1/2” CMOS sensor. This allows you to identify objects very clearly at a faster rate. The drone operators find it easy to switch between the visual, thermal, or split-view based on your project.

Mavic 2 Enterprise Dual beats the Parrot ANAFI in many key sectors making it a versatile tool for public safety missions. It comes with many advanced features and stands top in computer vision and security systems. Even with a skilled pilot, these can be the difference between a successful mission and a mission completion crash.

Both the thermal drones possess different thermal features for the enhanced vision of the scene.

A spot meter is a common feature of all thermal drones. Its role is to display the average temperature of an object in the surrounding. This helps the pilots to monitor and measure critical objects in the scene.

The area measurement feature is responsible for providing temperature differences in various locations. For example, if a building has got fired, this feature displays the lowest, highest, and average temperatures of the areas in the building. So you can easily identify the most critical portions.

It gives you a colored vision. You have to select a specific temperature range for using a custom color palette. The objects present within that range show higher contrast and better visibility.

The absolute feature highlights the temperature variations. This is very beneficial for inspectors while inspecting electrical lines, building surveys, etc. Same as DJI, the Parrot drone also allows you to choose any color gradient and the temperature range for highlighting the specific areas.

This mode helps to identify thermal anomalies instantly. It isolates only the hottest and coldest spots.

The ANAFI Thermal drone is cheaper than the DJI Mavic Enterprise Dual Thermal drone. The Parrot Anafi package comes with two batteries, so you need not want a spare battery when you’re out in the field. Each battery works well for more than an hour of flight time.

DJI lacks an extra battery. If you choose a DJI thermal drone, then you’ve to spend an additional amount on spare batteries.

The Parrot has developed Pix4DModel app for drones to generate 3D images using the thermal data. Free Flight 6 app is used to detect heat loss. You can use this app to merge thermal and RGB  images, so the thermal leaks are overlaid on the final image.

The intuitive controls and pre-installed features like DJI Fly App, SkyTalk and the DJI GO 4 app of DJI helps to get you up in the air quicker and more conveniently than ever before. The 5.5-inch built-in screen displays clear and bright images, even under challenging conditions. 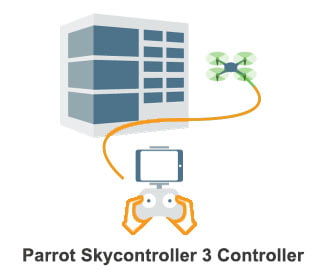 Parrot Skycontroller 3 is the perfect companion to operate Parrot Anafi Thermal Drone. It offers Wi-Fi connection for up to one mile, to remain safe from the risky areas.

Similarly DJI Mavic 2 comes with the DJI Smart Controller that is designed to maximize your flying experience in the outdoors.

The safety system is very important for the drones to handle in critical situations. Both models are provided with safety systems.

In DJI Mavic Enterprise – Comes with an Omnidirectional Obstacle Sensing system with 10 sensors placed on the sides, back, front, upward, and downward, so that the DJI Mavic 2 is aware of its surroundings. These sensors give more stability for the operator by determining the distance between the drone and an object and also relative speed.

Further this DJI drone is also equipped with new password protection login that ensures secure access to your drones and its features. This security prevents your data from getting into the wrong hands.

There is no doubt both the emerging thermal drones  ANAFI Thermal and the DJI Mavic 2 Enterprise Dual are best in its own powerful niche.

With its cheaper price tag and advanced features, the Parrot ANAFI Thermal represents a solid value for money and is a very good choice for those who are experimenting with thermal imagery from up in the sky.

DJI is an expensive model but a strong all-around package. If you’re willing to invest an extra amount on drones, then go with DJI. It can stay airborne for a longer period to track your mission.

To me both are the best portable solutions that can be easily transported and off the ground in a fraction of seconds.

Try out DJI Mavic 2 Enterprise Dual or Parrot Anafi Thermal drone for your project and for a successful mission.