FLIR C2 is considered to be the most successful version of the popular thermal product manufacturing company FLIR and that the nightvisiongears team loved using. At the same time, the FLIR C3 is the next version of the pocket-sized thermal camera released from that company.

The FLIR C3 Thermal Imaging Camera is composed of innovative technologies and updated features, besides, which is mainly designed for professionals who need a pocket thermal camera for day-to-day inspection.

The company FLIR constructed the thermal camera model C3 like C2, meaning all the specifications are matched with both models. The WiFi functionality of the FLIR C3 is one of the significant additions of this device. 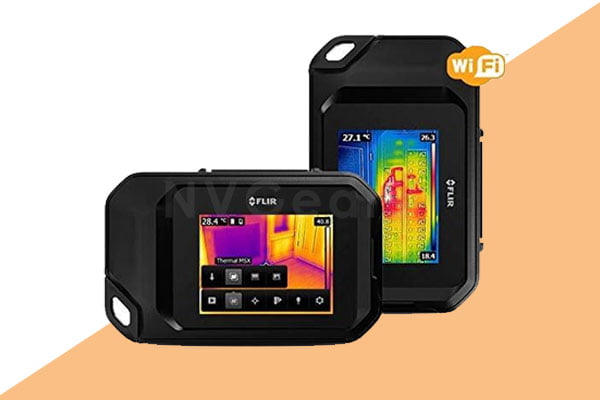 These features permit the user to easily share the reports and images which is a big development over the USB transfer in the FLIR C2. This thermal imaging device is effective in resolving issues related to electrical repair, heat leakage, plumbing, HVAC maintenance, quick structural inspections.

The FLIR C3 comes with an impressively long list of helpful features, and it is a highly practical device. It possesses a powerful thermal sensor with a wide temperature range, Wi-Fi connectivity, and a 3″ bright touch screen.

These allow you to take crystal clear and sharp images. This thermal camera also contains FLIR’s proprietary MSX technology that combines thermal and visual details. More so, this camera comes with a spot meter and temperate scale for enhancing your viewing experience.

We tested all the features of the FLIR C3 thermal camera in-depth to find the answer to your every question. This article provides you a detailed review of the FLIR C3 Compact Thermal Camera that is designed for professionals and experienced.

Let us take a closer view.

Why Should You Consider the Flir C3 Camera [Noteworthy Features]

Though the FLIR C3 Thermal Imaging Camera hasn’t the ability to provide a high image quality for conducting a detailed thermal inspection you will obtain ample features & technologies that make it an interesting option in this price range.

Let us begin with its noteworthy features. 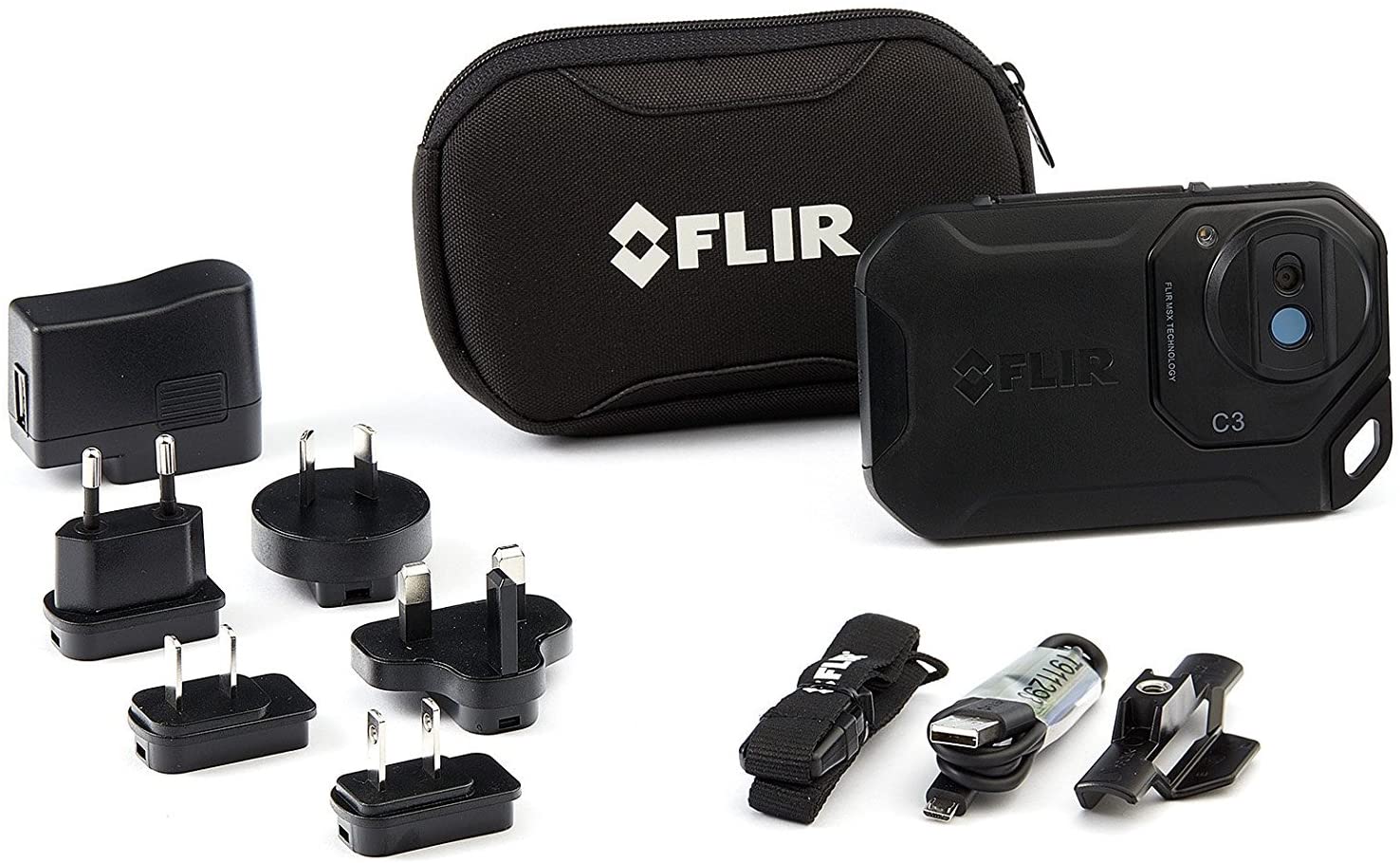 The FLIR C3 thermal camera is designed aesthetically and its exterior looks almost like a smartphone. The device comes with a dimension of 7.87 x 2.54 x 12.45 cm and it’s extremely compact in size.

All the components fitted in this device have very low weight thus its total weight is only 4.8 ounces, which is considered to be the lightest weight. This lightweight makes it a pocket-sized thermal camera this means you can carry this device conveniently without any hassles.

Furthermore, it comes with an international charger, lanyard, USB cable, memory stick, and starting guide. When it comes to durability C3 has as good as the C2. The exterior of the device is composed of rugged aluminum and rubberized polymer makes the device stronger.

The device appeared unharmed while our team dropped it from a height of 5 feet for testing. Using C3 in the industrial environment is not a big deal because the body made with a rubberized polymer renders the strong friction and excellent grip.

A large photo capture button and the power button are located on the top of the device which is very helpful in quick access. Similar to FLIR C2, C3 has a bright 3″ touch screen which gives smooth operation.

For capturing images in dark places, the device comes with an LED lamp. The overall ergonomics of this thermal device are excellent and effective. If you’re a person who is looking for a thermal camera with single-hand usage, then obviously you can go for C3.

When it comes to the downside of FLIR C3 it doesn’t specify any IP rating for the device. More so, it doesn’t come with a protective cover for the LED screen. 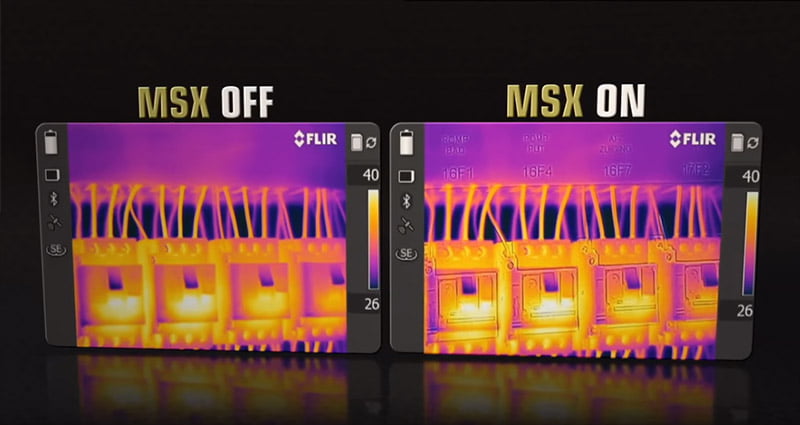 Surprisingly, both the cameras are operated while you snap a photo. The inbuilt software combines the normal visual aspects into the thermal image so that you can view precisely what you’re looking at.

If you are stucking under the dark places you can obviously use the flash option to get the bright light and bright images. With the help of this flashlight, you can get good visual images without sacrificing clarity.

To provide the image more clarity the device contains a Lepton® thermal micro camera and the sensitivity of this microcamera is 100mK. As well as, it comes with a powerful microbolometer makes the thermal camera more sensitive for small temperature variations.

The device comes with a 41-degree wide FOV, with this feature you can capture the images excellently even in narrow spaces. Combined with the Flir analysis tools and MSX imaging technology, the captured images are perfect after an inspection.

The images captured by C3 are good enough for an entry-level device. A noteworthy point is that although FLIR C3 is not a good enough thermal camera for long-distance photography it permits the user to take clear and crisp images in short-distance. 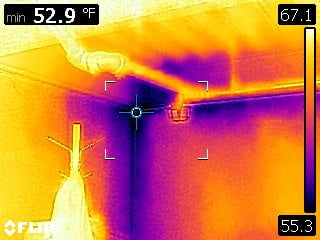 Small and affordable doesn’t mean you get low-quality images but it means you can get high quality and high-resolution images within the determined range. The FLIR C3 Camera is consolidated with a powerful 80 x 60IR thermal sensor that has the potential to detect the temperature range between -10 to 150 °C (14°F to 302°F).

Although this range is not sufficient for some industrial applications which are great for most types of investigations such as electrical systems, insulation, HVAC, and so on. Though the temperature range is not good enough the accuracy level is higher.

The device is designed with an accuracy level of 25°C are ±2°C (±3.6°F) or 2%. This is the perfect device for the person looking for a device with higher accuracy levels. C3 is best for close-up examinations due to its limited sensor range and distance range.

We never suggest FLIR C3 for long-range exterior inspections, ghost hunting, security, and long-range hunting. It can accurately spot the smallest thermal differences because the sensor of the device has a temperature sensitivity of less than 0.10°C.

This is essential for sensitive system inquiries. Its 41-degree FOV lets you examine a wide area at a time.

There are two methods to transfer the images from the thermal camera to another device; using USB or Wi-F. The easiest way is utilizing WiFi functionality that is handy and helpful when you want to share files immediately with other members.

The earlier edition of FLIR is C2 which doesn’t come with Wi-Fi functionality to transfer the files, instead, it is designed with the USB option to share the data. But the C3 model is incorporated with extremely reliable Wi-Fi functionality, this is a great benefit it has over the C2.

To connect the wifi, you need to utilize the FLIR tools mobile application which is available for free of cast. You can share or download the images and reports from the thermal camera through the application.

This wifi aspect allows two people to inspect an issue at the same time. Once you have transferred the images to the appropriate device (PC, Laptop, Tablet, Mobile), you can also investigate them and generate expert reports utilizing the free FLIR Tools software and email them instantly. 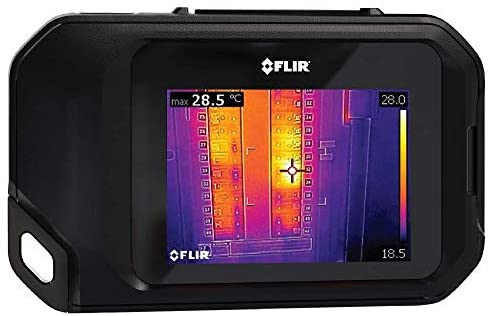 The FLIR C3 follows a non-contact temperature measurement system, which is one of the unique features of this thermal camera. This non-contacting thermal device is remarkably beneficial for professionals inspecting critical circuits and dangerous equipment.

This thermal camera comes with some valuable spot measurement equipment. Some of these are normally seen in high-end thermal cameras manufactured by FLIR. Experts and professionals liked the hot-spot aspect where the pointing cursor automatically moves to the hottest spot in the visual.

The device also comes with a span lock aspect that is used to isolate a particular temperature range that extends within your interest. The area measurement mode is another notable feature of this thermal device.

It permits you to determine the minimum and maximum temperature ranges in a labeled area. The excellent news is, the entire range of radiometric data of the images is saved for all the images captured by the thermal camera.

The FLIR Tools software contains a wide variety of tools that are helpful in analyzing the data after the pictures are downloaded. The device stored images in conventional jpg format for future preferences. 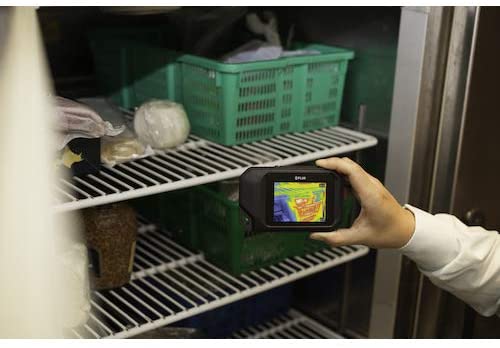 Many situations where rigorous inspections are carried out will necessarily require quality and powerful thermal cameras. But for routine inspections and normal testing, a small camera like the FLIR C3 would be an adequate choice.

Though the thermal camera doesn’t come with waterproof technology it has the ability to withstand a few falls and dirt hands. The hardy and rugged construction of the device makes it more strong.

Picture-in-Picture mode is another feature that distinguishes FLIR C3 from FLIR C2. You can simply locate a square box above the common digital camera image. This square box captures the essential thermal data for a particular target. As a consequence, you can examine the thermographic data, without missing the view of the surrounding.

The device is incorporated with a 3-inch bright touch screen that displays the images clearly. This touchscreen display makes it easier to navigate via the thermal camera’s interface and allows you to select the preferred settings.

This touch screen display works well in all light conditions because it comes with 3 brightness levels. This device has the ability to perform well at all light levels so you can achieve quality output wherever you are in bright sunlight or a dark basement.

Apart from the 3 levels of brightness, the thermal camera is consolidated with an LED spotlight which is a practical aspect. This spotlight provides extra illumination for operating in dark surroundings.

This additional aspect greatly improves the quality of the image and also aids the user in the visual inspection. The big advantage of this spotlight feature is that this light doesn’t show any shadows to the image and it won’t affect the image quality anyway. 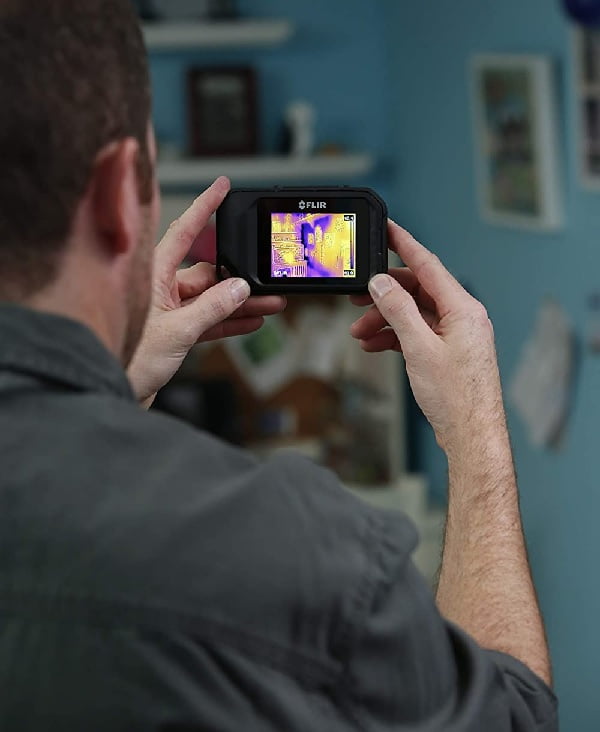 Generally, the FLIR C3 is designed as a plug-and-play device thus you can easily access this device without any hassles. Besides, both the main menu and submenu are very simple and quick to utilize.

Not only the appearance but some of its features are also similar to the smartphone which means the camera can auto-rotate all the images like smartphones. The device comes with a total of 4 color palette options; which are grey, iron, rainbow, & rainbow HC respectively.

The thermal camera is fitted with a single lithium-ion battery that can be charged through the USB cable which comes along with the package. The battery takes a minimum of 1.5 hours to get completely charged.

One can use this thermal camera continuously for about 2 hours as expected. And if you use Wi-Fi streaming then the battery is quickly drained.

The FLIR C3 Portable Pocket Thermal Camera is one of the best thermal cameras on the market, offering amazing features for both professionals and beginner users. Although the image quality of the FLIR C3 is not better compared to the FLIR C2, its WiFi functionality is an additional system.

Due to this FLIR C3 has become an excellent entry-level device. This ingeniously designed package is widely used to diagnose various household and industrial issues. This device offers great value for your money as it comes with great features like good image quality, solid build, user-friendly interface.

If you are looking for an ultra-portable thermal camera that delivers good picture details, the Flir C3 is the perfect product for you.