This scope by Bering, called the D-740 Series 4.0x, has many great elements in it. The specifications of its Night Vision is made out of multi-coated premium optics; it also has a casing molded from polyamide. In addition to that, its controls are laid out ergonomically.

If you are a fan of medium-range shooting, the D-740 Series 4.0x is the one for you. It is also designed to attain excellence when it comes to accuracy, even in unstable circumstances. It has a battery life that lasts for a long period (120 hours).

It can be used by just inserting batteries, specifically AA. It is another factor why it is one of the most outstanding in the field. Equipped sights in this specific scope built to be dustproof, shock-proof, and water-proof. Moreover, it is also purged with nitrogen. 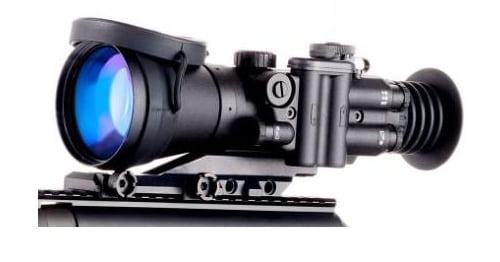 Buy From Amazon
Buy From Opticsplanet

Meanwhile, the BE73740MGUW, BE72740MGW, and BE72740MGPW all have the technology called White Phosphor is one of its features. Adjusting the visual’s brightness regarding the underlying light situation in a manual manner is made possible by the built-in gain control. Every sight under the D-740 is built with this.

This feature comes in handy most, especially when changes in light situations are recurrent. Images’ brightness can also be managed, thereby aiding in the effect called night concealment or blindness.

With the IR illuminator, your visuals will be enhanced, especially in surroundings with poor lighting conditions. It is part of the package when you purchase an External HTRN T-20 850nm. Because of this extra element, the shooter can access longer yardages measuring up to 300 yards, even when it’s nighttime.

Also, coyote hunting has been made easier because of HTRN T-20 Infinity’s rotary switch that is optional. It also provides a limitless amount of light intensity settings, which aids hunters to be stealthy as viable.

Also, Bering Optics D-740 Gen 3+ is equipped with a reticle that is Mil-dot. Its intensity can also be adjusted. With its reasonable price tag, a shooter can pick between white and the old-school green phosphor tubes without sacrificing its quality.

Compared to the green one, the white version’s display is a lot more comfortable for your sight; it also has a finer contrast definition. It also provides you with the fantasy of changing darkness into daylight. 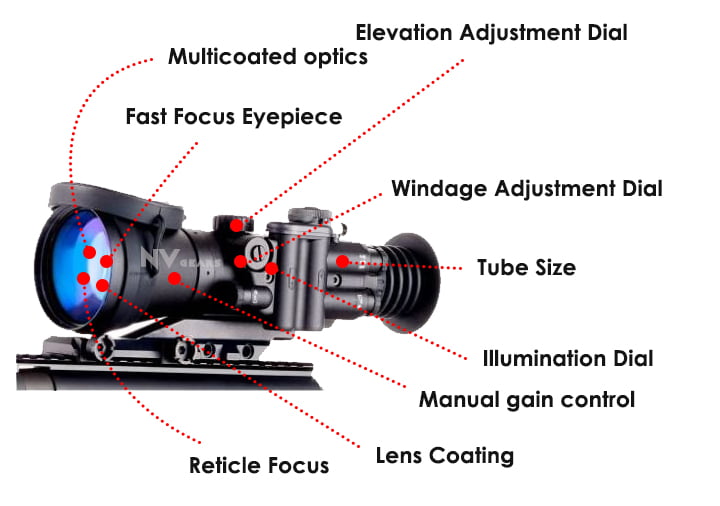 The elements of the said scope are also be discussed. It comes in black color with a matte-black finish. It also has an amazing fixed magnification of 4x. The equipped objective lens has a diameter that measures up to 62 mm.

The type of illumination is made out of LED lights. It has various illumination colors, such as yellow, amber or gold, and red. It also offers plentiful eye relief (45 mm). It has an 8mm exit pupil.

This scope is also parallax-free, like the other scopes available in the market. It also has an adjustment click value of 0.25 MOA and an adjustment range of up to 69 MOA.

The raw materials used in its lens are mineral glass. It is also multi-coated, as mentioned above. The type of attachment is the quick release or weaver.

The battery it uses is the double-A that lasts for 120 hours. It also has an operating temperature of – 40-50 celsius. Another good spec is that it is built to withstand harsh weather conditions—the level of its water resistance measures at IP67.

The measurements are as follows: it’s 9.3 inches in length, 3.8 inches in width, and has a height that is 3.1 inches. It is made from premium aircraft aluminum with a glass polyamide housing. Although it is not digital, and it has no adapter.

When you purchase this one, it comes with free add-ons. It includes two AA batteries, shoulder straps, a protective bag, a rubberized lens cap for your front lens, and a manual.

As highlighted in this article, this scope is equipped with multi-coated optics. Like any good scopes, it is also nitrogen-purged. It can detect ranges magnificently, making it suitable for shooting in medium-ranges. Its controls are designed to provide ease and comfort to the users.

It has a mechanism for the adjustment of internal focus, thereby giving you a smooth precision. Its gain control can be accessed manually. You don’t need to be worried about exposure to excessive light because it is secured.

Also, its mechanism to achieve your desired elevation adjustment and windage is accurate. Its reticle’s brightness can be adjusted; the reticle is a Mil-dot red on white or a red-on-green. Only two AA batteries are needed to power it up for a long period. You can also be sure that there will be no retention when it comes to medium caliber weapons.

Although, it can be paired with weapons with heavy recoil like a .50 caliber or a .375H&H. It is resistant to both dust and water. It has video and photo equipment that is flexible.

The Kit Has The Following

Bering Optics D-740 4×62 High-Performance Night Vision Sight comes with many accessories that will be beneficial to the hunter or shooter. It includes a protective bag, an NV sight, a manual for instructions, a rubberized cap to protect your front lens, an adapter for photos, a tissue to clean your lens, two pieces of double-A batteries, and a rail mount system called the standard weaver MIL-STD-1913.

Moreover, the D-740 can be paired with these accessories:

1. Various IR Illuminators
2. A case with a hard exterior

The Bering D-740 4.0x is equipped with good features, and if you are having a hard time choosing the perfect scope for your hunting expeditions, this scope might be the one for you. It is a good companion when hunting in medium-ranges, and you can be sure that it can survive varying weather conditions.

It also has a reasonable price tag considering that it comes with a lot of free stuff. This article summarized whatever it is that you need to know about this specific scope. If you still have questions, you can ask the recommendations of hobbyists or professional hunters to compare. Comparisons are a good way to help you in deciding with many things.

Picking out what scope satisfies your needs and wants can be tiring, but you should also know that you have to decide when the time comes; always factor in your budget without compromising your ease and comfort.

It is better to buy something that is of great quality rather than buy in short periods because of the scope you first bought already wore-off. Before buying anything, make it a point to ask and research to find out whatever it is that you need to know.