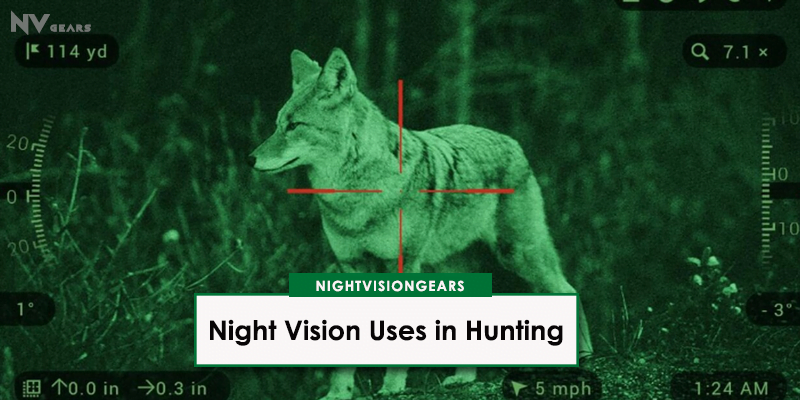 Hunting involves the process of identifying the animals by reaching their habitat and observing its activities to properly aim their movement and hunt them.

In the olden days, men used to hunt animals to meet their food requirements.

But in the modern generation, hunting has become a hobby. Also, to safeguard the lives of humans from the animals creating trouble.

Further, hunting is also a professional business for the uses of the fur, tusk, leather, etc., in various industries.

After getting dark out, we all struggle to see the objects clearly, and this night vision technology helps to overcome the problems of night vision.

Night vision is also called scotopic vision, and it provides the ability to see in low-light and dark environments.

These night vision goggles are special to wear in a dark situation. It’s a head-mounted or handheld device, and it’s similar to binoculars.

It helps to see in the darkness and a low-light environment. Night vision goggles are introduced for military personnel to trace out the enemy targets during nighttime; later, these night vision goggles are widely used in the applications of surveillance, Hunting, camping, wildlife observatory, and entertainment.

Night vision goggles use green phosphor to see the objects because the human eye is sensitive to green color more than any other color.

The image intensification inside the device is made of phosphor, and this phosphor on the screen makes green pictures. Different types of thermal imagers are used for hunting nowadays.

Thermal optics, including binoculars, scopes, and monoculars, are excellent tools for hunters.

These thermal optic devices are not only for nighttime hunting but also great for using daytime to spot the animals in low-light wooded areas, under the bushes, caves, and dark environments.

Thermal imaging Binoculars are the best hunting equipment, and these binoculars are widely used for hunting and used to spot the animals in the dark.

Thermal imaging monoculars are also used for hunting, and it allows to control the wild animals from the destruction of crops and farm fields.

This device has a detection distance from anywhere ranging 90m up to and exceeding 1.2km.

The developments in the field of technology have discovered thermal imaging technology to identify the animals and hunt them. With this technology, the animal can be detected with the heat they produce, which makes hunting much easier.

The thermal imaging cameras are those that have the sensors present in them, which help in performing animal detection effectively. They detect the radiation and display them in different color formats that can be visible to the human eyes.

How thermal vision helps in hunting?

The thermal imaging cameras play a vital role in spotting and hunting animals at night time.

Usually, warm-blooded animals are active at nighttime by using the darkness of night; they remain undetected.

Thermal imaging allows us to see the images clearly, and it works by using the method of thermal energy and infrared radiation for collecting information about the objects and creating images based on that information.

All the animals will emit infrared energy, and the infrared energy emitted by an object is known as heat -signature. And this can be detected by using infrared cameras. These devices are used by the hunters to observe the forest at night, and it helps them to see the images after the dark.

Benefits of Thermal Imaging in Hunting

What Are The Night Vision Uses In Hunting?

Among the various fields, the night vision technology is employed, hunting is the one which gains several benefits with this technology update.

The hunters generally go hunting when it’s dark since the animals return to their habitat after the sunset. Further, as most of the animals are nocturnal, they are inactive during the daytime and can only be visible in the night time.

When hunting at the time with a bow and arrow or a rifle, the chances of slips and deviated shoots are high as the human eye is not capable of viewing colors at night time. This is where the night vision device benefits the hunters.

As thermal imaging is capable of providing better vision at night and can also help in viewing the hidden areas, differentiating the trees and the crops, the hunters prefer using the thermal imagers widely for hunting.

Using a thermal imaging camera, a hunter can scan the field for a long duration to watch the movement of the particular animal and shoot it at the right time.

This will also avoid the strain caused to the eye, unlike the bow and arrow method of hunting.

Moreover, the thermal imagers are available in the form of monoculars, binoculars, rifle scopes, and several other models to benefit the hunters. Also, low weights and good ranges make the device more flexible and powerful gear.

Hunting is one of the oldest professions known to man, and it has lots of developments and advanced technologies nowadays. So that night vision technology has been employed in hunting, and it provides various benefits to hunters. Night vision is a great option for nighttime hunting, and it can be an absolute blast. Also, it’s one of the safest hunting methods and allows you to target very accurately. The host of technological development in night vision optics allows the hunters to see the animals more clearly and to shoot even from far distances. The hunting market affords a high perspective for thermal imaging. These thermal imaging devices supply excellent benefits for tasks like hunting and observing wildlife. Also, it saves time and helps in increased chances of shooting the animal correctly without slips. Using these technological improvements, hunting skills and ethics are furthered.