Recently, I got the opportunity to examine one of the more accurate prism scopes known as “Primary Arms 3X Compact Prism Scope”. Designed with fully protected features, this prism scope is highly suitable for hunting crowds, law enforcement, and sport shooting.

The trustest Primary Arms Prism scope is known for its do-everything capability. This review article will unveil the secrets of this Gen III Prism scope, thus you can know more about it.

It completely varies from other prism scopes as it’s etched with the ACSS reticle. Most of the users appreciated its combination of compact lightweight and ultimate power.

On the whole, I have determined that the Primary Arms Gen III Prism Scope be an efficient scope that comes with great durability.

Let’s get into the business… 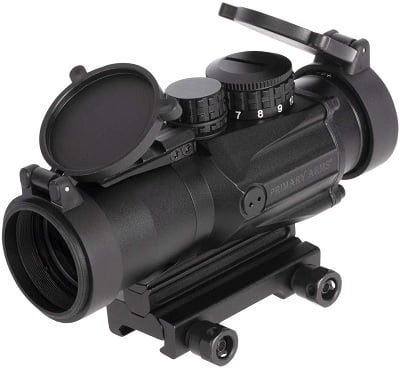 Buy From Opticsplanet
Buy From Amazon

The Gen III prism scope manufactured by the Primary Arms has all qualifications to be a do-everything scope, besides, it can be utilized on various shooting styles and platforms. Considering the quality construction, this scope must come at an expensive one, rather it is available with an affordable price range.

Note: The significant improvement feature of this prism scope is its CQB-m2 chevron reticle as it offers unbelievable advantages in the field.

Engineers do field tests on every single optic manufactured by Primary Arms before the deployment. I can attest to Gen III field capacity as I have personally experienced its ruggedness.

When we examine the durability of the scope in the hunting field, Gen III offers exceptional field durability as it is built with turret caps. The prism scope is completely covered with a matte black Type II anodized finish.

Since this Gen III Prism Scope can hold its zero perfectly, this feature stabilizes its brand. The company provides well-equipped tools to make adjustments to the device.

Gen III is definitely a durable prism scope available at an affordable price point. Not only do they offer affordability and durability, but also they have assured about their warranty on every product produced by them.

To test the submersion capacity of this Gen III prism scope, two of my friends who are experts in scopes joined with me. We chose a spot and traveled there through a boat. I established a 50-yard zero in scope and attached about 50 feet of 550 paracords.

Then my friend James was ready to submerge the prism scope, at that time the tide was high. I fixed the standard 60-minute marinating time and submerged the scope 25 feet under the sea.

After 1 hour, we pulled up the scope over the boat. We were very shocked that the scope powered right up without hesitation. And still, the reticle was bright and nice.

After the submersion test, I underwent the scope for a cold-weather simulation test. First I rinsed the scope with fresh water and then put the scope into the deep freezer then set the usual three-hour. But, unfortunately, I forgot to take the scope out of the freezer after three hours.

James reminded me about the scope after 4.5 hours, after we both went to the freezer box, took the scope out. The true surprise is even after that still the scope was working well without any flaw. The reticle was bright and clear, also I noticed there is no shift in zero.

For this test, Mathew helped me to check the final state of the scope. Initially, I started testing this scope for its drop-proof performance. At first, I dropped the scope from more than 6 feet, but the scope was stable and strong.

After that, I increased the height for each dropping test. When I dropped it from 20 feet from the ground to the concrete slab, it had some changes in it.

The turret caps had notable damage, the zero had slightly shifted to the left. When I clicked the illumination dial instantly, the scope displayed a clear, bright, and crisp reticle.

Throughout the test, the scope stood firm without major damages. That means it is proven that it has the potential to work in any kind of environment and bear any kind of impact.

Before going to analyze the magnification range of Primary Arms Gen III 3x32mm Prism Scope, it’s essential to know about the significance of fixed and variable magnification.

Why does fixed or variable magnification matter?

It is extremely critical to take the application into mind before buying a scope for any kind of purpose. Scopes have been developed in the same way that guns have been developed for purpose-oriented operations. There is no need for a red dot scope to hit a long-range shot. Because a qualified scope with a variable magnification range can simply hit the target which is even at the long distance.

In the fixed magnification scopes’ construction, there are some different glass elements associated to make them more versatile. Due to those glass elements, these scopes possess a higher light transmission rate.

Fixed magnification scopes permit only one magnification to observe the target. Since the more petite number of lenses utilized in this scope construction, they give low brightness loss and are optically brighter than the fixed type.

Since Primary Arms Gen III is equipped with a fixed magnification range of 3X, it is the best companion for short to mid-range shooting. This mid-range prism scope is ideal for recreational shooting, CQB shooting, 3-gun competitions. The Gen III is precise out to 600 yards.

Note: A great field of view of 31.5 feet at 100 feet makes this scope stable and compact.

The Close Quarter Battle reticle of ACSS boosts the shooter’s chance of obtaining contact on his first shot. By getting contact very shortly, the time spent on locating the target will be decreased. Though scope offers 11 brightness settings, it doesn’t give an option for night-vision compatibility. The ACSS reticle boasts as it has the potential to be visibly apparent in day and night firing.

The ACSS reticle has an integrated Bullet Drop Compensator (BDC) thus it can range out to 600 yards. The way the reticle etched into the scope’s glass is literally awesome. Depending on the application of both rifle and scope, it is important to mount a fixed magnification type of scope in your rifle.

The Primary Arms Gen III is a prism-style scope, which means it utilizes a focusing prism to provide visuals to an ocular lens. The Gen III scope equipped with a 32mm objective lens diverges from the conventional non-prism scope lens systems. For delivering easy zeroing, the scope comes with 1/4 MOA turret clicks which are audible and tactile. The plentiful 10.3mm exit pupil permits a forgiving and bright eye box.

Not only the fully illuminated reticle but also the whole unit is powered by a CR2032 3V Lithium Coin. Once the battery is deployed into the scope unit, it will provide powerful light for hundreds of hours. But Primary Arms Gen III engineers have assured that this version can run up to 3000 hours if you use the scope at low or medium brightness range.

This illuminated reticle scope comes with a removable spacer that allows the device to be utilized on various rifle platforms. As it comes with sufficient tactical aspects, it can be able to tackle any kind of tactical application. For easy tracking of the mobile targets, the wider FOV helps the most.

The M1913 Picatinny top rail comes along with the main scope which is removable. Not only Picatinny rail mount but Gen II prism scope is compatible with almost all the standard carry handle mounts.

1.] The eye relief was a bit short

If you are a shooter who is looking for the best prism scopes with fixed magnification, then bravely go for Primary Arms 3X Compact Prism Scope.

Some people dislike fixed magnification scopes, but a constant magnification scope is a clever path you need to take in your current rifle setup. The Gen III prism scope has been constructed with next-Gen ruggedized mounts to offer flexible mounting prospects with unbelievable clamping power.