EOTech’s humble beginning in the industry of scopes and other devices used for hunting is one of the reasons why it is known these days.

1972: In the year of 1972, the University of Michigan has established an institute called Environmental Research Institute of Michigan or more commonly known as ERIM in Michigan. This is a non-profit organization. This specific organization grew to be environmental and military research that has greatly contributed to a lot of developments made when it comes to radar, holography, and remote-sensing applications.

1986: The Environmental Research Institute of Michigan has presented some weapon sights that are incorporated with holographic applications for the U.S. Army to use. These weapon sights were used for anti-aircraft artillery and for gunships on helicopters.

1995: The EOTECH company has started to create some holographic applications for sights that are used for some small-sized firearms. ERIM has been its support all throughout this period since ERIM served as the incubator of the researches and devices made by EOTECH.

1996: The company of EOTECH introduced to the world their first holographic weapon sight at a television show, one of the leading brands, Bushnell, was there too. Later that year, the sight manufactured by EOTECH won an award from SIAE or Shooting Industry Academy of Excellence.

2001: EOTECH first introduced their sights for the use of military and some law enforcement applications. In addition, the Marine Corps of the US and their Special Operations or also known as USSOCOM chose the sights made by EOTECH as one of their most preferred combat optics when it comes to close quarters.

2016: EOTECH has introduced VUDU brands for precision rifle scopes that are made to have some properties that are known to contribute to faster target acquisition, accurate range estimations, and powerful levels of magnifications.

2018: The NRA or National Rifle Association has honored the company of EOTECH with another award because of the outstanding rifle scopes that they have manufactured in the prior years. This year has been another achievement for the milestones it has reached. 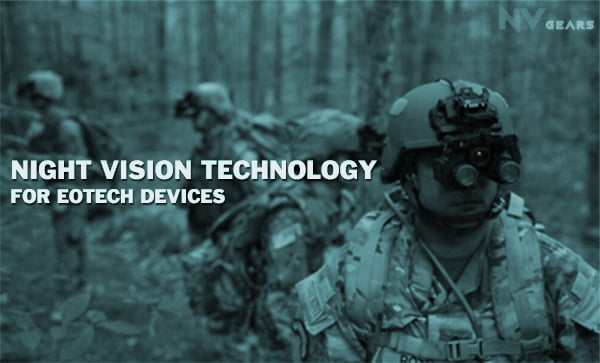 How Does Image Intensifier Tube Work?

Devices that are designed to have an image intensifier type of night vision technology are known to rely on the little amount of light available in the surroundings.

When the small amount of light that they gather enters their objective lenses, the photons in the light are being converted into electrons.

These electrons strike a multiplier which causes it to multiply in number; thus, producing more flashes of light. Once all that happens, a brighter image of the actual surrounding can be viewed on the device.

What is amazing about all this is that it happens in a very short span of time, once you look through your night vision device, you would be able to see an image right away.

Up to this current date, EOTECH is still manufacturing some devices that can be used for a lot of applications and a wide variety of weapons and firearms. Right now, EOTECH has officially separated from one of their major partners—the L3Harris. That is why they are an independent company again whose main focus is producing optics that are of superior quality and of the highest technology.

The night vision technology used for the devices of EOTECH is one of the reasons why this company has been known not just for their optics that are best in the daytime, but also during nighttime. EOTECH devices are known to be used all around for a wide variety of applications and missions that are conducted by military and other special forces in the United States of America. As mentioned above, this company has won several awards for the products that they have manufactured that is why it is one of the most trusted companies and brands these days.