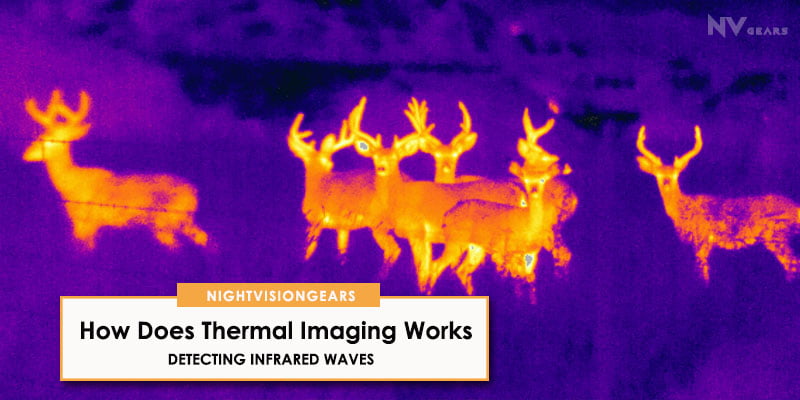 WHAT IS THERMAL IMAGING?

Usually warmer temperatures are often given a color of yellow, red, orange and the colder temperatures can be assigned a shade of blue, green, or purple.

For example, in the above image, you can notice the lady is shown in colors like red, orange, and yellow, but the other areas are blue and purple shades. The reason behind this radiation differentiation is that the lady’s radiating more heat than surrounding objects.

HOW DOES THERMAL IMAGING WORKS?

Most people confuse themselves with not being able to understand the exact difference between night vision technology and thermal technology. Both of these technologies give you the opportunity to see objects in the dark, both of which use very different technology to achieve the goal.

Typically, night vision devices operate using light from the moon and stars at night, which collects and amplifies all available light in the environment with the help of night vision technology. This allows you to see the target clearly even in the dark. Night vision objects capture target images using IR (infrared) light when ambient natural light, such as the moon and star, is insufficient.

Thermal technology operates in contrast to night vision technology, meaning that thermal devices do not depend on ambient light (moon & stars). Instead of ambient light, they take pictures with the help of thermal patterns. Scientifically speaking, all the natural and man-made objects emit infrared energy as thermal energy.

Humans and animals generate significantly more heat than their surroundings, based on which thermal devices are easily operated. The standard thermal device is to film them by the thermal energy released by the objects so that their moving is clearly visualized even in the pitch dark.

The Thermal imaging technology clearly detects even the most detailed variations in temperature, and then generates this thermal image into a very subtle temperature form called a “THERMOGRAM”. The device takes only a fraction of a second for an order of sensors to collect temperature data in the FOV (field of view) of the device to create the thermogram.

The software already installed on the thermal imaging device then turns the thermogram into electrical impulses. These electrical impulses are then converted as information (data) to a digital display. That display propels an image formed of various shades that resemble the intensity of the infrared emission of that visual object.

All the images that capture by the thermal imaging technology sounds high-tech and a bit complicated to explain. The essential information to recognize is that a thermal imaging device detects the heat signatures of the objects/things and utilizes them to create an image which is visualize to the human eye even in the absolute darkness.