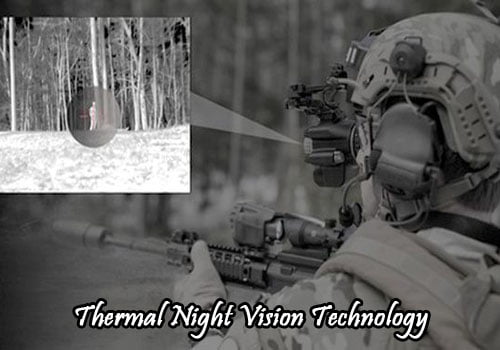 What is Thermal night vision?

The thermal imaging is one of the major night vision technologies that works to enhance the range of the human vision. The thermal night vision technology allows the user to view things or targeted objects with the naked eyes. In general, the human viewing ability is limited to a narrow visible band of the electromagnetic spectrum. The thermal energy constitutes of the long range of wavelength when compared to that of the visible light, which is not visible to our eyes.

How does it capture images?

With the use of the thermal imaging, the spectrum portion is expanded to an extent when no light is present in the surroundings. The thermal night vision uses the special sensor technology, to detect the heat change emitted from the object and convert it into the color image format. The captured color images observe the temperature changes in a short term, which tend to provide a clear view to the user even in the dark.

Who Does It Benefit?

This technology is mainly adapted for the security professionals, fire safety, law enforcement, and rescue management. The thermal night vision technique is widely used in the law enforcement, to detect the long distance activity even in the total deep dark condition and weather calamities such as mist, fog, smoke, dust, and foliage. The thermal night vision security camera helps to detect the threatening activities of the surrounding environment.

The thermal imaging consists of the special lens, which helps to focus on the emission of the infrared lights from the object to be targeted. The light focused on the object is scanned by the phased array of the infrared detector, to create the change in the temperature pattern, which is further named as the thermogram.

The created temperature pattern, incident on the detector element is then migrated into the form of electrical impulses. This electrical impulse formation is then transferred to the signal processing unit of integrated circuit chipboard, which helps to migrate the element information into data on the display unit. In the display unit, the information appears in various color formats depending on the infrared emission intensity, which further combines all the element impulse to produce the clear image vision.

The thermal imaging process of night vision technology is operated by capturing the upper spectrum portion of the infrared light, to emit the source from the object in the form of heat. The heat source does not reflect in the form of light. Mostly, the energy emitted from the sources related to the wavelength create a clear image vision.

The thermal imaging process works based on two major categories such as the cooled and uncooled versions of the thermal imaging process. The camera imager, which does not make use of the cryogenic cooler is referred to as the uncooled thermal imager as the design is based on the microbolometer. The microbolometer is one of the tiny structured vanadium oxide resistors, which acts as a good thermal insulator and a low heat thermal isolator and constitute the silicon element on large temperature coefficient measurement.