Whether you’re interested in hunting or target shooting, then magnified optics can help you more for improved range and accuracy. A red dot magnifier is constructed of a red dot sight with a magnifier that can be mounted either in front or behind it. Actually, the red dots perform great for short-range shooting as it doesn’t provide any magnification.

Unlike riflescopes, they don’t have a reticle of their own since they use the sight’s reticle for target acquisition.

In this blog, we’ll discuss in detail the purpose of the red dot magnifier. 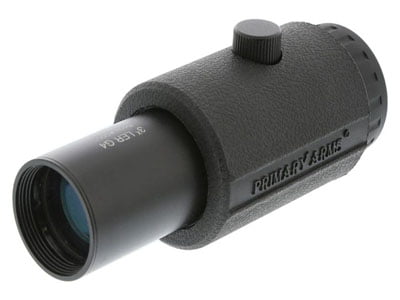 What is the purpose of a Red Dot?

Red dot sights help to aim at your target by positioning it perfectly, by the way, the target and reticle must be on the same plane. If it’s done the hunt will be quite easier. These sights are mostly used for military, law enforcement, recreational purposes because they can deal very quickly with your target acquisition.

It doesn’t offer magnification so there’s nothing to adjust for parallax errors or eye relief. You can attach anywhere on your rifle and start the game for better clarity.

Red dots perform like a champion for achieving short distant targets around 100 yards and it’s a bit chaotic for longer distances. In such a case, red dot magnifiers enter into the game and stand high!

What is a Red Dot Magnifier?

The red dot magnifier is a small magnifying optical device or a monocular that can be attached directly to an existing red dot sight.

It provides magnification from 1x to 6x, but 3x is a very common amount of magnification. The red dot is ideal for short-range shooting.

Red dot magnifier works like any magnifying optic, the only flop is they do not have a reticle of their own etched into the lenses. One of the major flaws about this magnifier is that it can reduce the red dot’s accuracy and speed of identifying a target for shorter ranges.

In order to avoid such circumstances, flip-side mounts can be used to attach magnifiers. The flip-to-side mounts will allow the shooter to use the red dot very easily without looking through the magnifier.

Red dot magnifiers can be used with almost all rifles so even if you get a new weapon, you can continue using the same optics with it.

How Do Magnifiers Work?

The red dot magnifier works best when properly attached to the non-magnifying red dot sights. These will enhance the range and accuracy of your firearms. When attached to RDS you’ll get a magnified image of your target to enhance magnification and eliminate distortion.

Most RDS magnifiers use a Doublet, Triplet or, Achromat Lens System. The RDS magnifiers can be attached either permanently or flip-to-side mounted, in case it’s screwed-in style, it could provide 2X magnification by directly connecting it to the scope’s body.

Some other RDS magnifiers will have their own mounting rails, having a 30mm scope ring.

There are two types of Red dot magnifiers,

Screw-in style magnifiers: An additional set of lenses is attached behind the red dot scope by directly threading into the scope body.

Magnifiers as standalone optics: They are placed behind the red dot scope in their own mounts. A fixed mount such as a 30mm scope ring can be used or can opt for flip-to-side mounts and change whatever you need.

When to Use Red Dot Magnifiers?

The use of red dot magnifiers depends on the type of shooting, for instance, if you’re involved in short to medium-range shooting, around 100-300 yards, then the ideal option is a red dot with a flip-side magnifier.

On the contrary, if you’re into long-range shooting then a red dot magnifier will spoil the accuracy of the target due to the enlarged red dot and the limited level of magnification. To overcome such cases, use a high-powered scope. Just make a decision based on your needs such as shooting objectives and preferences.

Red dot + reflex sights with an additional magnifier are more cost-effective than scopes and are also more durable and lightweight. Red dot magnifiers don’t cost much yet the mounting cost may be high so consult with professionals and choose the right one based on your needs.

You should use a red dot sight + magnifier when:

The RDS magnifier is a great piece of kit that can help you extend the useful range of your primary red dot sight by serving as an add-on telescope. Read this guide and you’ll get all the information needed about the working of the red dot magnifier.