We all know that humans have poor night vision ability than the animal kingdom, so what helps us to navigate in the dark? It’s night vision technology.

This Night Vision technology allows one to see in the dark. Using proper night vision equipment, we can see a person standing over 200 yards away on a moonless cloudy night. 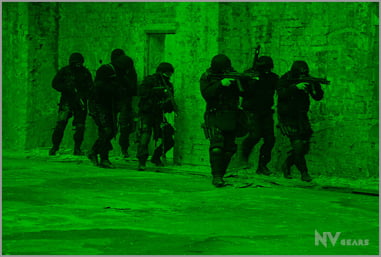 So that the night devices are introduced, using these night vision devices we can see clearly after getting dark out.

At first, these night vision devices are only used for military personnel to trace out the enemy targets at night.

Later the development of technologies caused these night vision devices to be included in various applications such as Observing wildlife, hunting, camping, search and rescue, surveillance, navigation, and law enforcement.

How Does Night Vision Work?

Night vision devices collect existing ambient light(moonlight, starlight, or infrared light) through the objective lens at the front of the device.

The collected light is sent through the image intensifier tube, and it has the photocathode tube.

As the electrons pass through the photocathode, which converts light(photons) into electrons.

Then the number of electrons gets multiplied in the photomultiplier cell; thus, it creates tons of electrons. 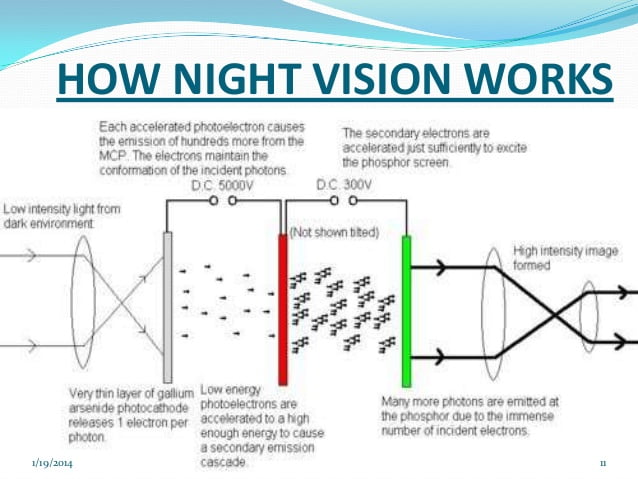 Moreover, night vision devices use natural ambient light from starlight, moonlight, and infrared light to create an image, and it does not work effectively in complete darkness.

Night vision works in two different ways, depending on the technology used, and they are image enhancement and thermal imaging.

These night vision devices depend on a special tube called an image intensifier tube.

This image intensifier tube works by collecting ambient light, including the lower portion of the infrared light spectrum, which is not visible to our eyes, and it then amplifies to a point and allows us to see the images.

Here is how the Image enhancement process works

Light capture- Mostly, the night vision devices consist of a common lens known as the objective lens. With the help of this lens, the infrared light and the atmospheric light are captured.

Light transmission- The image captured is collected and sent to the image intensifier tube, where the light hits the light-sensitive surface.

Photon conversion- The light transmitted is made of photons of various colors, which are converted to high energy electrons with the help of the photocathode that is present in the image intensifier tube.

Electron multiplication- The intensifier tube consists of a small glass disc called the microchannel plate, which is made of fiber optic technology.

As the electrons passing through the microchannels they release numerous electrons after amplification, and this process is called the cascaded secondary emission.

Creating image- These electrons reach the end of the tube, which has a screen that is coated with phosphors.

The electrons maintain a similar alignment as the photons, and they pass through the tube and provide a clear image, in turn, result in the phosphors to excite and create an image that is green in color. This is why the night vision images are green in general.

Magnification- The phosphor-coated, green-colored image is then passed through the ocular lens, which performs the magnification and focuses the image on being visible.

The resulting image can be viewed by connecting the night vision device to a monitor or directly through the lens itself.

Hence this process works by collecting tiny amounts of light in the surrounding environments and allows us to see the images perfectly.

The advantages of the image intensifier as night vision devices are lightweight, low-power consumption, smaller in size, and cost-effective.

And just think about it, what happens if you are in complete darkness? The image enhancement technology doesn’t work effectively in the absence of light. To overcome these situations, thermal imaging is a great solution.

It’s the method of improving the visibility of objects in a low-light environment.

This thermal imaging technology works by detecting the infrared radiation(heat) given off by objects and creating an image based on that information even in low-light environments.

Here’s how the thermal imaging works,

All the objects on the earth(natural and manmade) emit infrared energy, commonly known as a heat signature.

Focusing Light- An infrared light emitted by all the objects is focused on a special lens of the thermal scope.

The created pattern takes one-thirtieth of the second to receive the information. The obtained information is from several thousand points in the FOV.

Image creation- The signal processing unit translates the data into an image that can be viewed on a monitor, creating an image of different colors depending on the IR emission intensity.

Thermal imaging devices can scan at a rate of 30 times/second. Normally, they can sense the temperature that ranges from -20°C- 2000°C. Also, they can detect changes in temperature of about 0.2°C.

There are two general types of night vision devices and they are cryogenically cooled and uncooled.

Uncooled- It is one of the greatest among the night vision devices. The un-cooled detector uses a sensor stabilized at room temperature using control elements.

Image quality and resolution tend to be lower than cooled detectors. It doesn’t make any sound during the operational process.

Cryogenically cooled detectors are vacuum-sealed inside a container.

Also, these cameras can detect tiny variations of about 0.1°C from more than 300m away. But the cooled cameras have many disadvantages; bulk and expensive to produce & run, consume more power, and time.

The advanced versions of thermal imaging cameras were initially made for surveillance and military use but now they are used in a variety of applications such as building inspections, animal health, security, mold and moisture leaks, firefighting, industrial inspections, navigation, hunting, entertainment and much more.

Night vision is one of the emerging technologies and is widely used in various fields. Most people love to watch the habits of the animal species and to hunt and many of them are looking to discover the unique world after the sunsets.